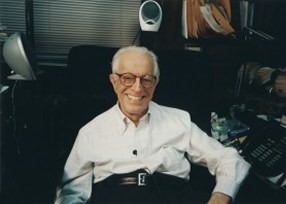 The man who revolutionized psychology and created the foundations of cognitive Therapy would have been 103 years of age today.

Dedicated also to fighting injustices and changing restrictive social norms, he was a major figure who greatly contributed to the changing of general attitudes held by many in the twentieth century and first decade of the twenty-first century, on women’s rights, racial equality, inter-racial marriage, gay rights, freedom of speech and literature – to name just a few. He introduced his cognitive approach to psychology in 1955 – attracting immense criticism and hostility as it conflicted strongly with the then-dominant Freudian approach of psychoanalysis. He persisted, and now the cognitive approach is the most widely practiced approach in the field. The New York Times wrote “Dr Ellis has had such an impact that … clinical psychologists ranked him ahead of Freud when asked to name the figure who had exerted the greatest influence on their field”.