This is an extract from my book entitled: Breaking the Vicious Circle of Psychological Misery.

The diagram below allied with detailed explanation has helped many, many clients and therapists understand a very complex series of symptoms that interplay on one another resulting from perception, demands, inaccurate definitions and memory.  These are the driving forces in creating and perpetuating psychological misery.

I felt a concise, simple to understand and effective road map was required for my thousands of clients.  Combined with understanding of the sensitivity of the nervous system, due to prolonged stress i.e. becoming fearful of the symptoms themselves, exacerbated by or living with an ongoing stressful situation, physical illness, a labile nervous system, misuse of alcohol/drugs were enough to create and perpetuate a fear-bewilderment-fear cycle, this alone would keep a person stuck in psychological and physical misery. 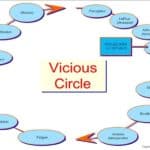 The prolific cognitive researcher Professor Aaron Beck set out to prove Freud correct but concluded that he was wrong.  Beck, like Albert Ellis the originator of cognitive therapy had been Freudian Psychoanalysts but had become frustrated with its inefficiency in helping their clients feel and stay better, long term.

Focusing in and actively disputing a persons irrational (non-self helping) beliefs: the prime movers in the creation of the above symptoms, was the goal of Dr Ellis.

It is fundamental in helping neuroses that the almost consistently presenting rigid perfectionist demands arising probably from the inbuilt human fear of failure (falling),  subsequent inevitable debilitating and consistently presenting guilt, certain life events, the aforementioned  labile nervous system, symptoms, and resultant inaccurate definitions about self, others and the world are highlighted and helped towards resolution by the therapist.

Choice is the key word here, to borrow an Ericksonian metaphor; If there was a plank of wood a foot wide stretching from this wall to the other and I offered you a £1000 to walk across it you would probably say” no problem”, but if I said what if there was a pit of snakes underneath it, you would probably become extremely doubtful and fearful.  This proves nothing other than your focus of attention has moved from the plank of wood to the pit of snakes and so have your beliefs!

Metaphors and breathing techniques (cognitive distraction) although useful at times are not blanket panaceas.

Actively proving the existence (not guessing and passing immature pejorative opinion) and then disputing and challenging the negative automatic thoughts and irrational beliefs in a pro-active educational way will do more to help the person maintain peace of mind long term and walk across the plank of wood!  The use of hypnotherapy there after allows the client to comfortably become more self-aware and adept at spotting (aha experiences) the said NATS and IB’s and initiating mutually agreed more self helping ones.

The breaking of psychological misery with knowledge, understanding and common sense is indeed a very philosophical substantial approach that consistently has proven to work.