World Exclusive review of Dr Ellis’ Autobiography “All out” 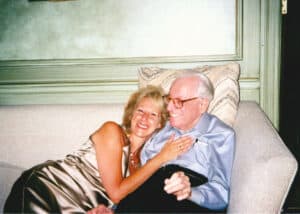 REVIEW OF “ALL OUT”! AN AUTO-BIOGRAPHY OF ALBERT ELLIS
WITH DEBBIE JOFFE-ELLIS

I have the pleasure of reviewing this 668 page book published by Prometheus Books, New York.
Release date 22nd June 2010.

This informative, revealing, wittily and candidly written memoir (a work in progress for many years, to which he was still adding at the age of 92 whilst contending with a range of significant physical problems) is dedicated to Dr Ellis’ wife Debbie who he describes as “The Greatest love of my whole life, my whole life”.

Given the Albert Ellis PhD detractors, and there have been many in a career that started in June 1943 and which came to prominence in 1955 with the advent of what is now called Rational Emotive Behaviour Therapy, it is relevant to note that this book starts with this emotional statement.

He endured barbed comments from Fritz Perls, originator of Gestalt Therapy saying that REBT was “too rational”. In fact the book reveals an emotional intensity unrivalled. In the context of love, sex, lust, philosophy, therapy, inner awareness and relationships it makes “Gone with the Wind” look uneventful!

“I give a unique picture of myself that is more multi-sided than memoirs that mainly stress adventure, business, sex or relationships. Not that I’ll omit those things, but rather I’ll add to them”.

Albert Ellis was born in Pittsburgh, Pennsylvania, USA on September the 27th 1913 and achieved great, great things; a fellow of 12 Divisions of The American Psychological Association, author of 80 books, 800 Academic Papers and creator of REBT (a more philosophical form of Cognitive Behaviour Therapy), one of the most popular psychotherapies in the world. Indeed, the Ellis approach, the original and pioneering cognitive approach, came 10 years before that of Aaron Beck’s Cognitive Therapy. Towards the end of the book, letters between Dr Albert Ellis and Dr Aaron “Tim” Beck are published, giving the reader a sense of the closeness between the men and their psychotherapeutic differences.

Dr Ellis shares his insights and probabilistic assumptions about people, himself, his parents, his physical ailments, death, important influences, love for music, composing, and the “Bogus Albert Ellis Institute”. From the outset Ellis goes ‘all out’ to unconditionally accept himself with his inherent human fallibility and to unconditionally accept others with theirs.

Ellis intertwines his relationship with his early childhood sweetheart Ruthie, his family constellation, and formative years, cogently assessing and enlightening the reader with passionate in-depth observations, whilst disputing and showing the limitations of Freudian Psychoanalysis and Behaviourism. While interned in hospital at age 6, he set out the format for his much later famous shame attacking exercises, which included a workshop attendee choosing to walk down Madison Avenue with a banana on a red lead!

Ellis discusses his use of prayer and religion and conclusions he came to about his use and practice of them. Low frustration tolerance (LFT) is given special mention throughout, with emphasis that it may be biologically part of the human condition. Ellis shows us how to manage it and work against it, even if some humans may be genetically pre-disposed to anxiety, anger and depression.

Stand aside Freudians and Jungians, Ellis really delves into childhood issues-his own! He shows how these two pioneering psychotherapies downplayed “the importance of cognition and ignored its crucial role in the more dramatic and emotional aspects of therapy”. The emotional closeness of the words and the author to the reader make the reader feel that he/she is part of Dr Ellis. Like honey to a bee.

He demonstrates his psychotherapeutic interventions with clients, asking them to de-potentiate another troublesome person’s impact on themselves “I say to my clients no matter how old they are: never take screwballs seriously”.

Controversy is rich throughout; readers will be most surprised, some quite stunned, to read of certain revelations that Dr Ellis never made public before now. Some readers may find some of the sexologist’s revelations hard to bear as he goes into frank details and reasoning, conjoining his therapeutic approaches.

He lays bare his thoughts on his colleagues (that he trained) taking over and banning him from teaching in and involvement in running his Institute, describing them “as pirates taking over a ship”. Further incisive comments follow about the people who have wronged him, but in true REBT style, he concludes that their actions are “bad, but not horrible”.

His wife Debbie contributes a chapter describing the care her husband received whilst in hospital and his resilience to dealing with adversities, whilst overlooking her own selfless contribution to him. It becomes even clearer than ever before, the true love, admiration and incredible compatibility the two of them shared. “Debbie has had the most profound and positive influence on my life”

Towards the end of the book Debbie describes the last few moments of her husbands life. The words she writes are laced with love, strength and sadness, re-creating the most moving scene imaginable!

Dr Albert Ellis passed away on July the 24th 2007 with an important wish:
“…my wife and partner, Debbie Joffe Ellis and our supporters can preserve the original and modified theory of Rational Emotive Behavior Therapy, to see that its philosophy is practiced by its teaching professionals and students and that its integrity as a theory is backed by empirically orientated research”.

Throughout the book, this pioneering and brave psychotherapist invokes within me laughter, empathy, and intrigue, astonishment, joy and deep sadness but effervescing through and emerging from these powerful emotions is a burning sense of hope and much greater clarity on how to achieve peace with self and others.
Dr Ellis conveys a rich tapestry of therapeutic presentation, then refreshingly crystallizes them with relevant up to date poignancy.

Anyone with an interest in people should read this book; it is passionately written with immense knowledge, therefore making it a potent combination.
I predict it will become one of the best sellers of all time and will end up on the silver screen. In short it is a startling, revealing insight of a man who successfully re-designed psychotherapy in an essentially brilliant, profound and truly effective manner then ultimately achieved recognition from prominent figures and leaders including the Dalai Lama, The Mayor of the City of New York, Presidents Clinton and Bush.

A copy of this was published in CBT Today September 2010 issue.